Facebook’s messaging app is adding new privacy controls, the company announced this morning. Initially, this will include today’s launch of App Lock for iOS, which allows users to lock access to their private chats by way of the device’s built-in security mechanisms, including Touch ID and Face ID. A second privacy feature, which involves new controls over your inbox and calls, will arrive soon.

The company was recently spotted testing App Lock in the wild, but it had not yet fully rolled out. Instead, Facebook said in June App Lock was only being offered to a small percentage of Messenger users on iOS.

The feature is now available to all users on iPhone and iPad, Facebook says.

To use it, you’ll look for a new option within Messenger’s Privacy Settings. This is the same area where you find controls that allow you to mute stories or block users.

Facebook plans to roll out App Lock to Android in the near future. 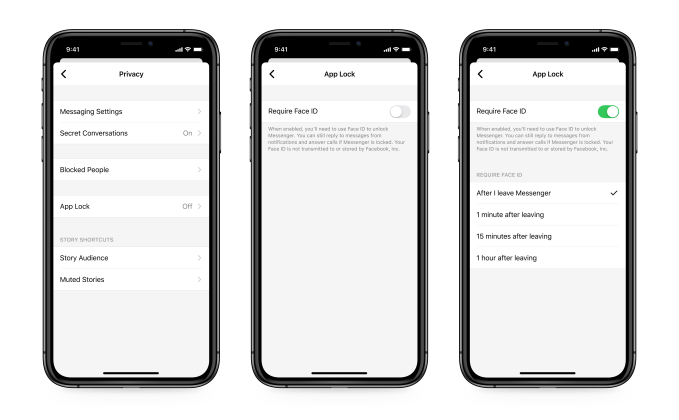 The upcoming messaging privacy controls, meanwhile, will be similar to those available on Instagram, where you can configure through settings who is allow to message you. In Facebook Messenger’s case, the controls will let you choose which people are allowed to message your inbox directly and which will go to your Message Requests folder, instead. This could help people keep their Messenger inbox more private for friends and family only.

You’ll also be able to set you can’t message you at all or call you.

Facebook says it’s also testing more private message requests features that won’t require you to view an image from someone new when deciding how to respond, block, report or ignore their message. This is similar to the existing feature on Instagram and WhatsApp that will blur incoming images from people you don’t know.

The company says it has not yet started testing these controls, but will soon.